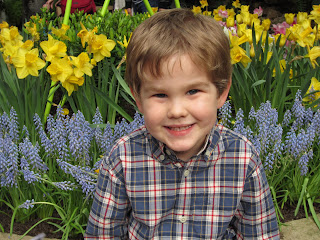 On Tuesday afternoons, we attend a homeschooling group that Elizabeth and Brian both love.  And while I love the people who attend and the philosophy of the group, I loathe the logistics of those two hours, especially now that Katherine has been thrown into the mix.

We arrive, Elizabeth trots off to her two classes, and I don't think twice about her until 3 o'clock.  Brian and I head down to the Preschool/Kindergarten class and the crazy begins.  We meet in a large room and the moms take turns teaching little lessons and playing games with the kids, ages 2-6.  For Brian, entering a large open room is an invitation to run in circles.  He can't keep his hands to himself (for very long) when there are boys around with whom he could wrestle.  If another child is running around, he has to join them, even if moments before he was engaged in what the teacher was doing.  He's not the only one that is "busy" during this time, but I always feel like I'm the only mother who has to say yell her kid's name several times before he hears me.  I imagine that most of the moms wonder if I ever discipline him.  Fortunately, over the years I've learned not to base my identity (positively or negatively) in my kid's behavior.  But still, I'm human, so I do sometimes wonder what kind of mother those other moms think I must be!

Anyway, today found us spending time out in the car on two occasions.  I wasn't mad, just trying to come up with some form of punishment that would help him to remember that to enjoy the group (which he really and truly loves) he needs to respect the teacher and the other kids.  Honestly, it's the roughest time of the day for him to be asked to sit and listen for any length of time ... unless it's television.  Usually after lunch we read, rest, and recharge.  On Tuesdays, we eat lunch and rush out to group.  This is why his behavior doesn't really surprise or infuriate me; I know he's doing the best he can.  That said, I still can be embarrassed by it at moments, fearing the reflection it is on me as his mama.

This afternoon, as we sat together in the car eating a snack during the second time out, I thought about my relationship with God.  I'm much better at disobedience and selfishness than I am at obedience and sacrifice.  But none of those is the basis of our relationship.

This is how God showed his love among us: He sent his one and only Son into the world that we might live through him. This is love: not that we loved God, but that he loved us and sent his Son as an atoning sacrifice for our sins.  I John 4:9-10


I think the way I love my little Brian, no matter how many times delights me or drive me bonkers, gives me a little glimpse into how God feels about me (or any of His children.)  God's grace interruption for me today was the reminder that no matter how much I stray or how many times He has to call my name before I turn to Him ...


I can rest secure in that and never be afraid to turn around.


*I'm writing daily this month on being interrupted by grace.  Learn more and join in here.
Posted by Heather at 10:31 PM

Email ThisBlogThis!Share to TwitterShare to FacebookShare to Pinterest
Labels: As a Blogger, As a Parent, Because of Who God Is