Day 18: Interrupted by Transformation (in progress) 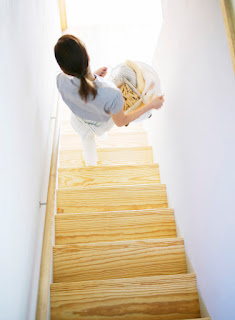 On Wednesdays I do the laundry, so the day is punctuated with trips up and down the stair to switch loads and bring loads up to fold.  As a result, Wednesday is usually an at-home kind of day.  Today was no exception, but for a short trip to the library to get some fresh reads for the kids.  Also, my friend, Jenna, dropped by in the afternoon to catch up a little - babies have a way of making relationships get a little behind! - which was a treat in the middle of an otherwise ordinary day.

So, nothing fantastic happened today, but Katherine could not sleep.  Every nap I put her down for was one big struggle for her.  Thus there were a few periods I had to hold her, when I normally would not need to, so by the time this evening rolled around, there were still clothes to fold (by some miracle all the loads had been washed and dried!) and the dishwasher, which was clean and ready for emptying this morning before I got up, had yet to be unloaded.  I couldn't get to blogging before I addressed those things.  And since it's our Community Group night, I got to them much later than normal and by the time I finished washing the dishes it was time for Katherine's 10pm feed.  Phew, where does the time go?!

Before we left for the library I was starting to get a little, um, overwhelmed.  I'd had to hold Katherine when I'd wanted to gather up the library books (they were too heavy for the kids to get down to the car), and I wanted to get the laundry switched so it would be going while we were away, and I didn't know if Katherine would be happy waiting in her car seat while I got these things done.  I felt the pressure building up inside of me, you know the kind that makes you feel like you're a volcano about to erupt?  I was getting frustrated because life was reminding me that I'm not keeping up and I'm a failure and I was getting hot (I hate feeling hot!!) because I was rushing around trying to get things done on time ... though there wasn't a deadline, the kids were playing well, and Katherine was happy as a lark in her seat.

I did do some mumble-volume-level complaining about feeling inundated by the demands on me, mostly to "talk myself down" from getting angry at no one in particular.  But you know your family members are always the innocent victims in these situations.  I didn't want it to come to that.

And you know what?  It didn't.  God was good.  The Spirit edged His way in and enabled me to keep my cool and speak kindly to the kids while we all stumbled out of the house and piled into the car, as I thanked them for helping to keep Katherine happy.

In the not too distant past, I would have felt quite justified unleashing my emotions on the little people around me with harsh words and rough hustling to the car.  Sometimes (too frequently) I still do.  But today I was reminded that I don't have to go with my emotions; they're not the boss of me!

His divine power has given us everything we need for life and godliness through the knowledge of Him who called us by His own glory and goodness.  I Peter 2:3

Our pastor in Cambridge used to repeat this quote:

It's all of grace.
Solo Deo gloria!

Have a good night's sleep; I'm on my way there now!

Email ThisBlogThis!Share to TwitterShare to FacebookShare to Pinterest
Labels: Because of Who God Is, With the Family