My mother-in-law gave me the day off from kids (who can talk) today.  Isn't she the best?  Seriously, if you knew how awful a daughter-in-law I have been at times, you'd think me more of a fool than you likely already do!  I could stop there, probably, because that was certainly a grace to me today.  But I won't let myself off that easily.  I will, rather, let you in on how selfish I am when I do get these me times. 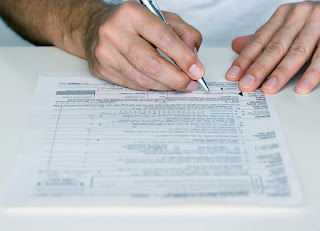 So, I had the day "off."  I must confess, as I already have to my husband, that I feared that since he knew that, he'd take my time away by making me sit to do the taxes with him.  Instead, he started them while I was dropping the kids off with his mom, finished them by lunchtime, and all I had to do was sign.

I got to do my own thing and thought not a lick about the taxes, till he asked me if I would make him a sandwich.  I said I didn't really want to, but would.  There was no reason I needed to say I didn't want to, was there?  But I did.  Making a sandwich for my husband takes maybe a minute: bread, meat, cheese, lettuce.  No condiments, no frills.  A sandwich.  And I had a rotten attitude about making it - right after he'd finished the taxes for our family - and told him so.

I had offered to get the one tax form that needed to be mailed to the post office before five, but remembered this about the time in the afternoon that I know traffic starts to get busy on the road to the post office.    I was just about to start another project on my day off, before the last hour passed and I had to feed Katherine again.  But I said I'd mail it and I needed to go - right then.  So, cheerfully and joyfully  groaning and moaning, I gathered up my things and went.  (I'm such a martyr, aren't I?  I mean, really, the ways I sacrifice!!)

And you know what?  He really did have mercy.  The traffic was light, I beat the rush of a handful of other customers, and made the whole round trip in about 15 minutes.

Wow, I didn't deserve that grace.  But I guess it's not grace if we deserve it, eh?  I was certainly interrupted; God got my attention.  I ate my nice big slice of humble pie, and gave thanks.

Did you have a wow-I'm-a-big-sinner day like me?  If you did, I pray God was and is interrupting you with His grace and you've found rest for your soul.

Hey, don't forget!  There's a little giveaway going on that you can enter until midnight tonight.  Check it out here.

Email ThisBlogThis!Share to TwitterShare to FacebookShare to Pinterest
Labels: Because of Who God Is, In Homemaking