We were heading out for a somewhat spontaneous trip to Phipps Conservatory.  I needed to pop some laundry into the dryer before we left.  As I was doing so we talked about each having a piece of gum once we got into the car.  The gum was in my purse at the bottom of the stairs. Brian knows what pocket I keep it in.

I was around the corner in the laundry room taking care of my task.  At one point I heard Brian going into my purse.  Popping my head out the door of the laundry room, I made sure he was looking at me and firmly told him that if he got the gum out, he would not get a piece.

I finished up with the laundry, and found Brian with the gum in his hand.

Brian was not going to have a piece of gum, and I told him as much.  For a moment, I considered that Elizabeth and I shouldn't either.  He was going to cry; it would make our lives more bearable if we skipped the treat too.

But then what was the point of setting the limit in the first place?

After everyone got settled into the car, I gave E her piece of gum and had mine.  Brian was MAD!  As expected he started crying, begging for the gum, kicking he legs, writhing around.  (I was glad he was strapped in and couldn't try to get himself a piece; he'd probably beat me in a wrestling match!)

I spoke calmly, but firmly, reminding him that he made the choice not to wait until we got in the car and lost the treat.

Then I said something like, "I'm not pulling out of this driveway until you calm down."

Right after I said it was thought, Oh geez, what did I just do.  We probably won't be able to go out; we'll have to go inside and give up on our outing or sit her forever.


A minute later he sighed and we left.


I really did want to give Brian a piece of gum.  He LOVES gum, almost obsessively.  And much later in the day, when he asked for a piece ever so sweetly, I did give him some.  I was glad to know that he wasn't holding a grudge either! 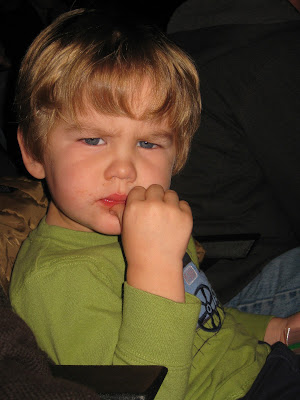 I share these two stories - Part I is here - to give you some examples of stickin' to your guns, even when it's inconvenient or painful.  It's so good for these little ones to learn that the world does not revolve around them, that their actions have consequences (good or bad, you can praise them for obedience too!), and also that they're loved even after they've disobeyed (if we give clear rules and lay out the consequences for disobedience, we don't need to hold a grudge, we apologize, hug, and all just move on after the fact.)
My hope, too, is that you will be encouraged.  This mama's default mode is anger, annoyance, and impatience.  Sound familiar?  But there are times that I see the light breaking through, God is changing me.  Those women, like Sally Clarkson and Susan Schaeffer Macaulay, who seem to have the right words to say at the right time in so many of their stories, have been molded and shaped by the Father. They're not super heroes; they're disciples of Christ who have sought to disciple their children following His model.  It's no pipe dream, God works in our hearts as we're "in the trenches" learning as we go along as parents.
There's so much hope!
Will you reach out, grab it, and enjoy the ride?!
Posted by Heather at 6:00 AM

Email ThisBlogThis!Share to TwitterShare to FacebookShare to Pinterest
Labels: As a Parent, discipleship, grace, kids, parenting