Wow, yesterday I was interrupted by grace early, before I wrote the intro post to this series, in fact.  And it wasn't subtle! Like being unexpectedly punched in the stomach, the Word of God took my breath away and I was laid out in my spirit. 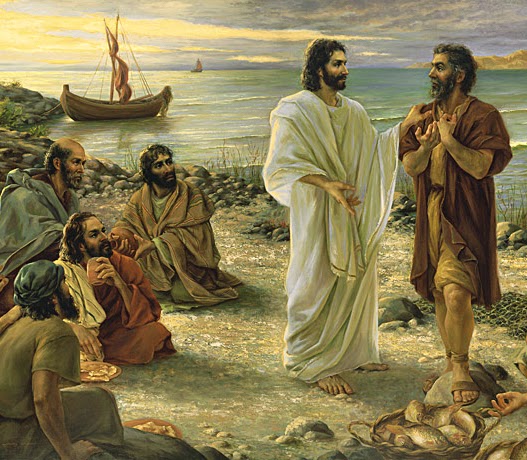 I have been reading through the book of John this Lent, and by the way, it seems extra special to be starting an interrupted by grace series out on Holy Week.  Can't really miss grace this week, can we?!  Anyway, so I've been reading John and yesterday I was in the last chapter.  Jesus is back and He has appeared to the disciples a couple of times; the darkness of Good Friday has been eclipsed by the  resurrection of the Light of Life.  But at the same time, it's clear the disciples aren't sure what to do now, because they're out fishing, and having a tough time of it one day.  Jesus arrives on the shore, gives them some instructions, and they have an unbelievable catch!  THEN, the guys are like, "Hey, it's Jesus!"

While the rest of them row to shore, Peter jumps out of the boat and swims or runs to get to Jesus first!  He CANNOT WAIT to be with His Lord.

Now, do you remember what happened to Peter after the soldiers took Jesus away?  Jesus had told him he would not be as faithful as he planned, that he would actually deny knowing Jesus.  And that is exactly what happened.  In Jesus' most desperate and lonely moments, Peter pretended he had no idea who Jesus was.  When the rooster crowed, Peter sobbed.  He had, in fact, denied His Lord, who He so passionately loved and followed.

Yet he still runs to Jesus when he sees Him on the shore.

After Jesus and His disciples eat some of that catch of fish, Jesus has a little conversation with Peter.  This was my punch-in-the-gut interrupted by grace moment yesterday.

When they had finished eating, Jesus said to Simon Peter, “Simon son of John, do you love me more than these?”

Again Jesus said, “Simon son of John, do you love me?”

He answered, “Yes, Lord, you know that I love you.”

The third time he said to him, “Simon son of John, do you love me?”

Peter was hurt because Jesus asked him the third time, “Do you love me?” He said, “Lord, you know all things; you know that I love you.”

Do you see what Jesus does here?  For each denial, Jesus hears and I love you from Peter and gives him work to do.  There's no, I told you you so!  Jesus' relationship with Peter is based on grace, one night's denial did not sever their relationship.  Peter loved Jesus so much.  How much he must have grieved the day Jesus died, especially knowing he had not been faithful to Him!

I was interrupted by grace with the reminder that Jesus knows how much I love him and how much I struggle to be faithful to Him.  He shows me He loves me by being faithful to me and continuing to call me to live for Him.  And from Peter I learn, no matter how far I've strayed, to always run to the grace-filled arms of Jesus!

Amazing grace, how sweet the sound,
that saved a wretch like me.
I once was lost, but now and found,
Was blind but now I see.

Email ThisBlogThis!Share to TwitterShare to FacebookShare to Pinterest
Labels: Because of Who God Is, In the Word