Live Alive {Day 6}: Because Jesus Lives, I Can Live

Jesus is a pretty well known and well regarded fellow.  He did amazing things (miracles, anyone?) and hung out with undesirables.  He challenged the religious authorities and touched lepers.  But when you read the Gospels (the four books about Jesus at the beginning of the New Testament: Matthew, Mark, Luke, and John) you quickly pick up on something about Jesus.  While things he did were revolutionary and new, He had a very specific mission from which he never deviated.  His primary purpose wasn't to do cool miracles to gain notoriety, make the Pharisees feel stupid, or even to uplift the downtrodden.  Nope.  The one thing He did everywhere was preach.

From that time Jesus began to preach, saying, "Repent, for the kingdom of heaven is at hand."  Matthew 5:17

Jesus came with a message-based mission that was centered on bringing rebels back into God's Kingdom.

The fact that Jesus came with a word to preach makes me think of the beginning of the book of John:

Which also makes me think back a few posts to Genesis 1: God creating the world with His word and God as the source and sustainer of all life.

You see, according to the Bible, Jesus is God.  He has been from all of time, just like God the Father, and He had a very specific role in the rescue mission.  He became a man to dwell among us, not only to show us what God is like (Colossians 1:15, Hebrews 1:3), but also to defeat the power of death that entered in at the infamous eating-of-the-fruit.  Jesus brought the kingdom of heaven into enemy territory, and He never backed down from His role in changing the game: to set people free from death so they could live alive again!

But that would cost Him a lot more than enduring the sneers of the Pharisees and being regularly misunderstood by His disciples.  For the mission to be accomplished, Jesus needed to be the sacrifice of all sacrifices:

"The Son of Man must suffer many things and be rejected by the elders and chief priests and scribes, and be killed and on the third day be raised."  Luke 9:22

For us to have an opportunity to be restored to right relationship with our Creator, someone needed to take the punishment for our rebellion.  Jesus did that.  And He was able to do that because He lived an un-rebellious life in perfect harmony with the Father, just as Adam and Eve did before they rebelled.  Then, after taking our punishment by dying on the cross and declaring the work "finished," He rose from the dead.  He was victorious not only in atoning for the sins of all those who would believe in Him, but also over the power of death!  Because Jesus is alive, we can be, too!

I love when the women show up on the first Easter morning and don't find Jesus in the tomb, the angel present says to them: 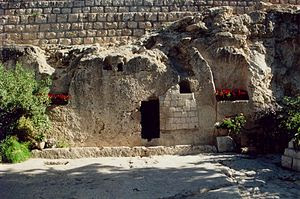 Friends, we can live alive because Jesus is alive!  He could have simply atoned for our sins and left it at that.  But God, in His infinite wisdom and by His power, raised Jesus back to life, so we too could know and have life!  God the Father never does things halfway.  He extends mercy far beyond what we deserve or can even comprehend most of the time, because if we're honest we know how unworthy we are.  This Jesus-is-alive thing is really important!

But in fact, Christ has been raised form the dead, the firstfruits of those who have fall asleep.  For as by a man came death, by a man has come also the resurrection of the dead.  For as in Adam all die, so also in Christ shall all be made alive!

Jesus came, preached the message of repentance and faith, then made the way for the dead to be brought back to life: sins forgiven, life restored.  You see, the power of life rests in God alone.  I have wondered as this truth as I've thought about this series.  There was no other way for us to have real living life as sons and daughters of the King, not just existing life as orphaned rebels, than for the Life-Giver to take drastic measures.

Because of His great love and mercy, in His perfect timing, He took those measures.  Those measures can change our lives if we will but respond to Jesus' first sermon: Repent, for the kingdom of heaven is at hand.

Are you ready?  The message and the mission were for YOU.  The door is open.  Repent of your rebellion.  Believe the Good News that the message and mission were accomplished for you.  Your sins will be atoned for, the rule of death in your life will be overthrown, and the King will lead you into a new alive life.

And that, my friends, is where we head tomorrow and the rest of the series: what are the hallmarks of this alive life?  The Lord has so much he wants us to know, embrace, and enjoy in the new life He gives.

Till tomorrow, and every day thereafter: Repent and believe the Good News,
(It's not too good to be true; it's too good to not be true!)
Heather 💛
Posted by Heather at 7:27 AM

Email ThisBlogThis!Share to TwitterShare to FacebookShare to Pinterest
Labels: Because of Who God Is, In the Word, In the World