For some of you, the next few of posts will be review.  You're quite familiar with the Bible stories about creation, "the fall," and God's redemption plan.  For others, you may only think of the season we're in when you hear "the fall."  Wherever you find yourself on that continuum, my prayer is that the Lord will use each post to draw you deeper into life with Him. 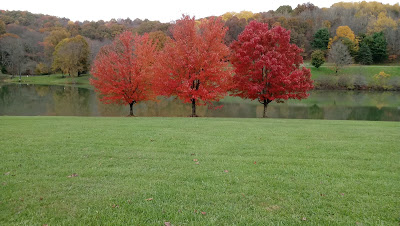 What do you think of when you hear the word alive?  Naturally, most of us probably think of breath, heartbeat, blood coursing through veins.  Then, if we think about longer, we move toward thinking about feeling alive, like our life has drive, purpose, and meaning.  Or people talk about really feeling alive when they're doing something daring or starting a new adventure.  I think, and I hope it's safe to assume, most of us think being alive is a positive - we want life to keep on being.  Death or even despair are things we don't like to talk about or experience, even though we know they are part of life.

To explore the concept of life from a Christian perspective, we need to open up our Bibles and we need to start with the first page where it says, In the beginning, God [Elohim - God the awesome and majestic creator] created the heavens and the earth.  Hey, earth, that's where we live!  This may have something to do with us.  For many verses, the author goes on about how God created the earth and the creatures that dwell on it.  Then in verse 26-27 things start to get personal:

Then God said, "Let us make man in our image, after our likeness.  And let them have dominion over the fish of the sea and over the birds of the heavens and over the livestock and over all the earth and over every creeping thing that creeps on the earth"

So God created man in His own image,in the image of God he created him;male and female he created them.

I'm fairly certain that a billion and one sermons have been preached on these verses, and there are so many things to learn (since God's Word is living and active) and angles to take.  But for now, we are simply thinking about how we were created for living.  Did you know there is a second account of creation in Genesis 2?  There is!  It hones in on the creation of man and woman:

Then the LORD God formed the man of dust from the ground and breathed into his nostrils the breath of life, and the man became a living creature. ... Then the LORD God said, "It is not good that the man should be alone; I will make him a helper fit for him. ... So the LORD God caused a deep sleep to fall upon the man, and while he slept took one of his ribs and closed up its place with flesh.  And the rib that the LORD God had taken from the man he made into a woman and brought her to the man. ... And the man and his wife were both naked and were not ashamed.  (Gen 2: 7, 18, 21-22, 25)

Genesis 1 tells us that we were created in God's image and then Genesis 2 gives us a little detail about how God formed us: dust from the ground or a rib and the breath of life breathed into us.  God gave Adam and Eve rule over the rest of creation.  There was something different about this species of creation, this humankind.  The major difference came from their relationship to this God who created them.  The personal-ness of the relationship is expressed in Genesis 2 with the use of the name LORD God, which is Yahweh, "which is God's personal name and used in the context of God having a relationship with His people." (In our Bibles, if Yahweh is used, it is written in all caps.)

So a couple of things about being alive:


Tomorrow we will venture into Genesis chapter 3, where things go terribly wrong!  But for today, let's meditate on these two Bible truths.  I encourage you to consider what it means to you that God is your Elohim (creator) God and your Yahweh (wants a relationship with you) God.  And, if you want to take it a step further, also consider what it means that that is true for those around you, too. Our God is so great that one name can't encompass all that He is!  Let us awe and wonder that this God of all cosmic power and dominion also breathed life into humans and created us specifically in His image and for personal relationship with Him.

You were created to LIVE!
God loves you and made you on purpose.

Email ThisBlogThis!Share to TwitterShare to FacebookShare to Pinterest
Labels: Because of Who God Is, In the Word