Last time we were together, I shared with you about how the Bible explains what went wrong with Paradise.  God created the world to function one way (quite beautifully and in harmony with Him), humans chose to rebel against His authority and love, and, well, it doesn't take a genius to see how that has worked out!

BUT, there was that strange promise in the midst of the curses about the serpent bruising the heel of the offspring of Eve, but the offspring crushing the serpent's head.  God had some kind of plan in place to deal with the deceiver and the effects of death in the world. 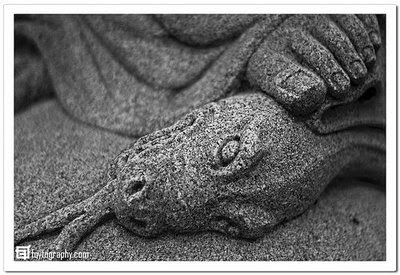 As a reminder, the point of this series is to consider how we can live alive, rather than being dead men walking, i.e. people who are physically alive but not vibrantly living.  This exploration is directed at Christians who I believe, based on Scripture, should be the most "alive" people on the planet.  I think this because there is so much imagery in the Bible about God bringing His people out of darkness and into the light or out of death and into life.  It sounds so good!  And yet, because the prince of darkness is still allowed to rule here, after meeting Jesus and coming to believe in Him life can quickly dull again, because we routinely forget that we are no longer dead, but alive.  The struggle is real!

So, back to the head-crushing of the serpent!  Death entered in when Eve and Adam believed the lie that God did not have their best interests at heart and rebelled against their Creator and Lord by disobeying His one rule.  No longer could they enjoy freedom in their relationship with Him or each other, death and shame built an impenetrable wall between all those relationships.  Living in rebellion became second nature; all their offspring would be born into it.

But God, though He removed them from the Garden, never abandoned His image-bearers.  For hundreds of pages in the Old Testament, we can read stories about God participating in and guiding history for His glory and purposes.  He chooses a people, makes promises to Noah, Abraham, Moses, and so on.  He gives them rules to follow to live rightly for Him.  He places kings on thrones when His people ask for them.  (Terrible idea, by the way, but God used that to direct His people as well.)  While the kings reign He sends prophets to communicate to His people what He wants them to know.  Over and over again the people - people who have experienced God's mercy and been led by Him - rebel against His authority and love.  It's devastating.  And it is all too familiar.

You've tried, haven't you?  To be a better person?  To get your act together?  To love your neighbor more?  To be kinder to your family?  To not get so angry?  To resist the temptations to lie, steal, gossip, and lust?  Yeah, me too.  Has it worked out as poorly for you as it has for me?  I imagine so.  Or perhaps you find that you can keep one area of life together pretty well, but give in to self-love, self-rule, self, self, self so quickly in all the others!

as it is written:

"None is righteous, no, not one;      no one understands;     no one seeks God.All have turned aside; together they have become worthless;    no one does good,    not even one."

For by works of the law no human being will be justified in His sight, since through the law comes knowledge of sin.

On our own, we can try really hard.  But truth is, because we are born rebels, we cannot be righteous or seek God without an intervention.  All the law (God's rules for how to live alive) does for us in our rebellious state is make us aware that we are failures and cannot regain favor with God!  We need help!

But now the righteousness of God has been manifested apart from the law, although the Law and the Prophets bear witness to it -- the righteousness of God through faith in Jesus Christ for all who believe.  For there is no distinction: for all have sinned and fall short of the glory of God, and are justified freely by his grace as a gift, through the redemption that is in Christ Jesus, whom God put forward as a propitiation by his blood, to be received by faith.

The only thing that can restore us to life, to right relationship with our Creator-Yahweh, is God inserting a big ole BUT!  His name is JESUS.  He is the head-crusher of the serpent.  Here in Romans Paul explains that the pages of history of God's people have borne witness to His coming and His role in bringing the rebels back to life.

God knew that they only way to restore rebels to Himself was to make the way for them.  It would cost Him a lot.  He sent His Son into the world to live in human skin and bones to show us what He is like and the extent to which He'd go to save us from death and bring us back to life.  The catch, however, is that we have to receive this atonement for our rebellion as a gift through faith.  There is a path back to living alive, but it requires us to say something similar to this:
That's pretty much what "becoming a Christian" is.  From that point, we can get on with the business of living alive because we are made alive and given His Spirit to help us!  Have you done this?  Ever considered this?  Would you like to?  If you have already surrendered to God as your new leader, are you in awe that it is His work, start to finish, to bring you to faith and enable you to live alive?

I wasn't sure where this post was headed today, but I trust this is what the Lord wanted me to share.  Tomorrow we'll take a look at Jesus and what He did specifically to save sinners (us rebels) and why it is so important that He is alive.  For now, consider what a shift in allegiance could or does mean for you:

.. you were dead in the trespasses and sins in which you once walked, ... But God, being right in mercy, because of the great love with with which He loved us, even when we were dead in our tresspasses, made us alive together with Christ ...   Ephesians 2:1, 4-5

Email ThisBlogThis!Share to TwitterShare to FacebookShare to Pinterest
Labels: Because of Who God Is, In the Word, In the World