Genesis 1 and 2 teach us that God created all that is, including humans in His image, breathing life into them, making them for relationship with Him, and giving them work to do.  The impression you're left with after reading those two chapters is that the world was a good and beautiful place, fertile and flourishing.  The last verse of chapter two even says, And the man and his wife were both naked and were not ashamed.  Not only could people freely relate to God and enjoy Him and His creation, but there were no barriers or shame between them either.

So, what went wrong?

I look at the world now - and inside my own heart and mind - and my first thought is not always "good and beautiful place."  Sure, the fall foliage is amazing, but people are not living in harmony with their Creator.  And the shame piece?  Shame rules the day!  We all hide behind walls we build up to protect us from people knowing who we really are.  And, we wear clothes!  Today's world is not like what God set up in Genesis 1 and 2.  Again I wonder, what went wrong?  How could it go so bad?  Isn't God big, strong, and wise enough to keep things together?  I certainly like the idea of living in a place and in relationships like that.  Why would anyone want to screw up such a good gig?

Now the serpent was more crafty than any other beast of the field that the LORD God had made.He said to the woman, "Did God actually say, 'You shall not eat of any tree in the garden?'"  And the woman said to the serpent, "We may eat of the fruit of the trees in the garden, but God said, 'You shall not eat of the fruit of the tree that is in the midst of the garden, neither shall you touch it, let you die."

In three verses we learn some new things about this paradise:


Guys, there's so much theology in these few verses.  I don't know enough - nor do I have the time - to go into it all.  But maybe, reread those again.  I'll wait.

As I think about it this morning, I'm struck anew by the fact that God could not have been surprised things went south.  He gave His people a choice from the get-go.  They were not puppets.  And, the serpent who speaks had already chosen to defy God (he is believed to be the devil or satan - whose name I refuse to capitalize, haha - who was an angel who had rebelled against the Lord).

But the serpent said to the woman, "You will not surely die.  For God knows that when you eat of it your eyes will be opened, and you will be like God, knowing good and evil."

The serpent gets at the woman with a lie: the God that made you and put you here doesn't actually have your best interests at heart.  You could do better.  He's withholding something from you, but you can have it! 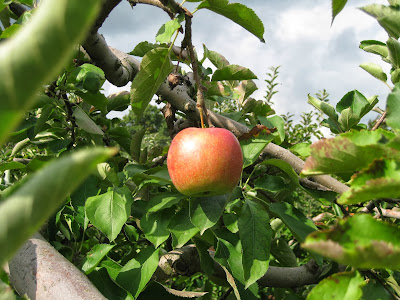 So when the woman saw that the tree was good for food, and that it was a delight to the eyes, and that the tree was to be desired to make one wise, she took of its fruit and ate, and she also gave some to her husband who was with her, and he ate.  Then the eyes of both were opened, and they knew that they were naked ...

Darn it.  Rather than tell the serpent where to get off and remain loyal to their God, Eve and Adam believe the lie and rebel against their Creator.  And THAT is what went wrong.

You may notice that they did not die, as the serpent had said.  At least, they didn't die in the sense that we think they should have; you know, like God didn't smite them on the spot, ending the human race.  But rebellion opened the door for death enter in.  No longer could they be freely together.  No longer could they enjoy strolling in the garden in God's presence; they hide from Him, v. 8.  And a blame-game begins: the woman made me do it, the serpent made me do it!  (Every parent in the world knows this game among their children quite well.  And we all play it, too, if they're honest with ourselves.)

We need to note something here, in this dark space when paradise is shattered by rebellion against the Good Creator (who only gave them one real rule!): they don't die-die.  God is gracious.  The image-bearers have to leave the garden and  life now will be plagued by curses (vs. 14-19), but God clothes them and makes a promise, to the serpent.


Even as rebellion destroys paradise, God's discipline is full of mercy.  Hey image-bearers, you really blew it for selves and your descendents.  Your new existence under death is gonna be hard, but I have a plan to restore our relationship.  Time will bring it to fruition.  I am not abandoning you, but you and your offspring must now live out your days under the rule of death.   Living alive,  the way I created you to, will now be fraught with struggle and sorrow.

That struggle has been the hallmark of life since Genesis 3, which explains why it is so hard on our own to know God, relate well with others, choose joy, to live alive.  But by believing in Christ, the only one to never rebel against God, we can be restored to right relationship with God and receive help from His Spirit to overcome our own desire to rebel and try to rule our own lives.  We'll learn even more about Jesus and His role in living alive next week!