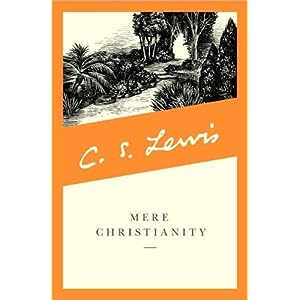 I'm finally reading Mere Christianity by C.S. Lewis.  For some reason, I always imagined it would be a complicated book, far above my understanding. A book for smart people.

The book came out of a series of radio talks that Lewis gave to the British people during the Second World War.  Asked by the BBC to explain to his fellow Britons what Christians believe, C.S. Lewis proceeded with the task as if it were the simplest thing in the world, and the most important, says Kathleen Norris in the Forward.

As usual, I'm not finished with a book and I'm recommending it.  I'm only about 50 pages in, so if you join me now, we can read it together!  I'm reading a chapter a day.  The chapters are short, each a quick read, though the reader is left with plenty to ponder.
Posted by Heather at 2:08 PM