This morning we embarked on E's first experience with a team sport! Earlier this week at a friends' house, I saw a flyer for the West Cambridge Baseball program, which includes Tee Ball for kids 4-5. Turns out there is also an East Cambridge league, so we went this morning to check it out. Perhaps my girl will end up not enjoying ball playing, but I (really, really, really) hope that she does and can enjoy girls softball as much as I did growing up. If it's not for her, I promise I won't force it on her. What follows is a photo/video journal of the morning.
Elizabeth tried to find someone to play with:
first stop, home plate. 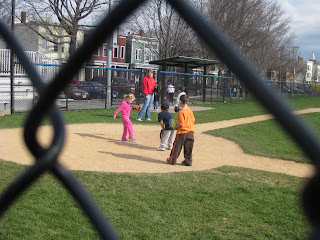 She managed to get the organizer to give her the ball he had.
I made her share and play "catch" with a couple of other kids.
(She didn't really want to share, but it worked out.) 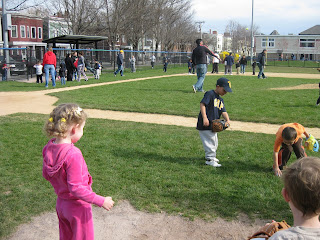 Elizabeth, Charlie, and Justin.
Charlie lives at Westgate
We knew Justin from the library. 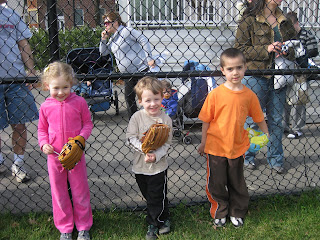 When things got organized, they began with some base running. The kids all lined up and ran to first, then back to the end of the line. After that, they ran to second, and back to the line. Then third to the line. And, finally, they all got to do a full run around the bases. A great way to start, especially for Elizabeth. She loves to run!

Running to second base. 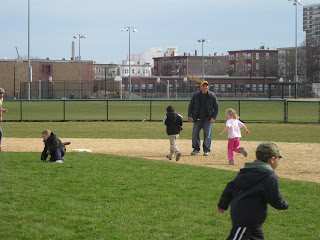 It was picture day, so they got their hats and t-shirts! 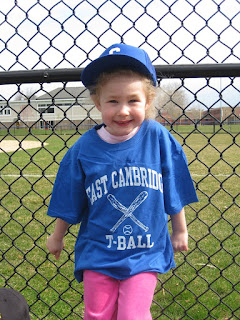 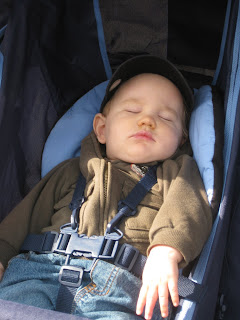 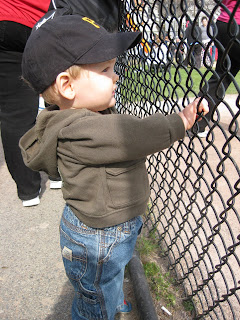 (I can't get enough of this baby in jeans!)
Last night at dinner Elizabeth expressed concern about playing tee ball. I asked her why she was feeling worried. Her response was something like this: "I'm afraid that I'll hit the ball really far and hurt someone."

And I thought she was feeling nervous! Ha!
Posted by Heather at 1:30 PM