Yesterday I sped through some thoughts on the first seventeen verses of Colossians chapter three.  Now we'll slow it down a bit and go through these verses in shorter sections.  We'll begin with verses one through four.

Since, then, you have been raised with Christ, set your hearts on things above, where Christ is seated at the right hand of God. 2 Set your minds on things above, not on earthly things. 3 For you died, and your life is now hidden with Christ in God. 4 When Christ, who is your life, appears, then you also will appear with him in glory.

Set your hearts on things above.  That's where Christ is!  Christian, you died, and now your life is hidden with Christ in God, because now Christ is your life.  When He comes again, you're gonna join him in his glory. 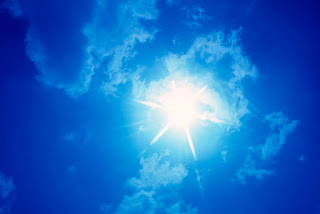 I'm like a babbling idiot next to the eloquence of F.F. Bruce (and probably many other people, too!), so here are his summary thoughts about this passage (after which he goes into greater detail, verse by verse, which I will not be typing out for you).

The Colossians are reminded that they not only died with Christ; they were raised from the dead with him too - as indeed they have been already told (Col 2:12).  When Christ left the tomb, he was raised on high, and is now enthroned in glory, at God's right hand. What does this mean for those who by faith have been united with him in his death and resurrection?  They continue to live on earth in their mortal bodies, but they have embarked on a new way of life.  The motive power enabling them to follow this new way of life is imparted by him from the glory in which he now lives.  Since his people share his risen life, their interests are now centered in him; his interests, in fact, have become theirs.  They must therefore pursue those things which belong to the heavenly realm where he reigns; their mind, their attitude, their ambition, their whole outlook must be characterized by their living bond with the ascended Christ,  they now live with him and in him.  Their life is bound up with his; it is, in other words, laid up in safekeeping with him, securely hidden in God.  Because he lives his people live also: because he is their life, their life is as eternal as his.  The world cannot see their real life at present, just as it cannot see the exalted Christ.  A day is coming, however, when Christ will be revealed in glory, and those whose life is at present hidden with him will necessarily be revealed with him and share his glory.  (p 131-2)

Praise God, right?!  What a great prelude to Sunday worship.

I'll close with one more of Bruce's comments as a bridge into the next verses, which we will look into on Monday:

What God has done for his people in Christ
is the grand argument and incentive for Christian living.
(p 124)

Have a blessed Sunday.  One week till Advent begins!!

Email ThisBlogThis!Share to TwitterShare to FacebookShare to Pinterest
Labels: As a Blogger, Because of Who God Is, In the Word