As I was reading back through the passage on Saturday, I noticed that Paul continued his don't-be-taken-captive thread in his Gospel presentation in verses 13-15.

13 When you were dead in your sins and in the uncircumcision of your sinful nature, God made you alive with Christ. He forgave us all our sins, 14 having canceled the written code, with its regulations, that was against us and that stood opposed to us; he took it away, nailing it to the cross. 15 And having disarmed the powers and authorities, he made a public spectacle of them, triumphing over them by the cross.  Colossians 2:8-15 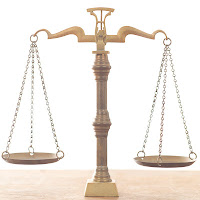 First, he reminds them, You were dead, BUT GOD made you alive with Christ.  Not only were their day-to-day sins keeping them in bondage and death, but their very sinful nature (an orientation opposed to God) needed to be addressed as well, for them to have life.  God did that for them in Christ.  How?

Verse 14, He forgave all their sins AND cancelled the written code by nailing it to the cross.  Not only does God forgive our sins past, present, and future, in Christ, but He also strikes out and breaks the power of the law that screams out, CONDEMNATION!!!  We need to be rescued not only from our sinful behavior, but from the judgement against us which Jews found in their inability to uphold the law and Gentiles found by not keeping up with what the consciouses told them was right.  Like it says in John 3:17-18, we're already in a state of condemnation, Jesus came to save His people from that.

For God did not send his Son into the world to condemn the world, but to save the world through him.  Whoever believes in him is not condemned, but whoever does not believe stands condemned already because he has not believed in the name of God’s one and only Son.

The written code, which stood against us and opposed us,  was cancelled
because Christ finished His work.

Paul then points out that just as the law was an insurmountable stumbling block, so were the spiritual rulers and authorities.  It says in verse 15 that God disarmed them, made a public spectacle of them, and triumphed over them by the cross.  The darkside, so to speak, was forced to raise the white flag when Jesus died on the tree.  There, at the cross, they thought they'd won.

If you've ever read The Lion, the Witch, and the Waredrobe, you surely remember the scene when Aslan lies dead on the table and evil beasts and beings are dancing around and delighting in the sacrifice.   What happened in the morning?  The table was broken and Aslan was alive!!  The "deeper magic from before the dawn of time" had triumphed over the evil!!!!  The powers and authorities were disarmed, made a public spectacle, and had been triumphed over.

The reign of the evil forces/powers/principalities is finished,
because Christ finished His work.


So Paul is saying, Look, dear brothers, don't be led astray by gazing too long at the law that tells you what you were.  And don't be led astray by thinking that the powers and authorities have any say in who you are and in your fate.  No sir.  Instead, keep looking at Christ, who by the cross, oh the glorious cross!!!, cancelled the written code and its condemnation of you and took care of the evil ones that wanted to have power over you.  Do not be afraid, take heart, Christ has overcome the world!

I love F.F. Bruce's final comments on this section.  He's exceedingly more eloquent than I, so I give his words to you.

The message proclaimed by Paul to the Colossians remains the one message of hope to men and women in frustration and despair.  Christ crucified and risen is Lord of all: all the forces of the universe are subject to him, not only the benign ones but the hostile ones as well.  They are all subject to the one through whom they were created; the hostile forces are also subject to the one by whom they were conquered.  Therefore, to be united to him is to be liberated from their thraldom, to enjoy perfect freedom, to overcome the powers of evil, through participation in his victory.  The redemption that is in Christ Jesus is a cosmic redemption; its healing virtue streams out of the farthest bounds of creation.  But it is a personal and particular redemption too: the conqueror who is enthroned at God's right hand, supreme above the universe and filling it with his presence, is at the same time enthroned as king in each believers heart.  p. 112-113

Email ThisBlogThis!Share to TwitterShare to FacebookShare to Pinterest
Labels: As a Blogger, Because of Who God Is, In the Word