Over the summer, several 4 and 5 year olds here have learned to ride bikes without training wheels. It took Elizabeth a while to be interested as much as her friends, but she's mastered it after a couple of weeks of practice on a very small (12" wheel) bike that a former resident left behind. She got the balance after several days of practice, then quickly learned to start on her own and brake using the pedals.

Tonight, in celebration, we went to Target and got her her first kick stand. When we got home, Colin lowered the seat on her bike a little more, by removing a reflector. Thus, she was able to reach the ground enough with her feet to take of riding on her own within a couple of tries! She seemed much more comfortable on a bike her size; but we are grateful that we had that little to teach the basic skills.

The little bike she learned on. 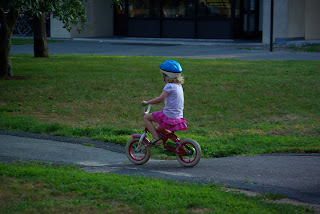 Here she is in action!

In other news, last night she had her first scary-enough-to-need-to-sleep-with-mommy dream, about a witch on the playground. She ended up sleeping in pretty late as a result of being up a while in the night. Tonight she asked us to pray with her that she would not have another scary dream. These are difficult parenting moments, not the praying part, but the not-knowing-now-to-fix-it part. Hm, I guess that's why we pray.
Posted by Heather at 8:32 PM