Since I disappeared for the month of January, I missed getting to tell you that my dad moved to Rwanda early in the month.  He's been a professor of electrical engineering at Carnegie Mellon University for many years and was asked to direct a new master's program that CMU is opening in Rwanda.  You can read more about it here.  He and my mom will live there for the next one and a half to two years.  (My mom stuck around here to meet baby Katherine and help us after her arrival; she leaves to be with my dad on March 1.  I'm so happy for them and so sad for us.)

One of my father's colleagues is a young woman my age named Crystal.  They discovered a while ago that her father was at University of Illinois doing graduate work the same time as my dad WAY back in the late 70s.  :)  The families didn't know each other.  Since then, though, my folks have met Crystal's, who now live in Kigali, Rwanda's capital city, and my father has been attending their church there.

A couple of weeks ago, my mom made a discovery.

She's been furiously going through all of the closets, cupboards, and rooms of their house, preparing it for the tenants who will live there while my folks are gone.  There is a LOT of stuff in my parent's house; we'll pretend that it has nothing to do with tons of junk that my siblings and I still store there ...  a-hem.

But, back to the story.


One evening she'd spent quite a while going through photos that had been haphazardly tossed in boxes at some point.  She was on the last box and ready to just pitch it, but felt something telling her she should persevere and finish.  As she got toward the end of the box, she found a few photos from the day I was dedicated at their church in Champaign, IL.  As she looked at the picture she could hardly believe it: there were two African families in the photo and one couple looked very much like what she imagined Crystal's parents might have looked like 30 years ago.  She asked herself, Could it be?  Could Crystal and Heather have been dedicated on the same day almost 33 years ago?!

Contact with Crystal's mother seemed to confirm that yes, it was them.  For final proof, my mom checked my baby book and found this bulletin clipping: 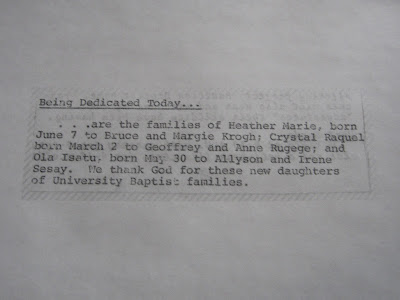 When my dad wrapped up one of  his bi-weekly letters to family with this story, he concluded:

As I wrote to Anne (Crystal's mom), "if something like this were in a novel or movie, it would be dismissed as simply being too unrealistic."  I’ll close here for this time.

Can’t come up with anything more to top that.

We can't come up with stories to top the work of our Sovereign God, can we?!

In his heart a man plans his course,
but the LORD determines his steps.
Proverbs 16:9

I'm left wondering what God has in store for my parents as they begin this new adventure.  I'll keep you posted.