The Prince of Peace - Part I 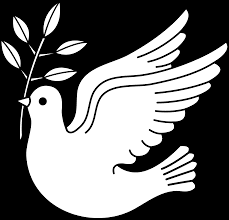 Sunday evening I was invited to be the speaker at a service our church hosts once a month at a local continuing care retirement community.  There's a group of church members who regularly facilitate the service, providing musical accompaniment and structure for the time, but individuals rotate in to give a message.  I don't post much here these days, but since I have the content all typed up anyway, I thought I'd share it with you.

The Lord directed me to speak about peace, specifically the Prince of Peace.  How did He direct exactly?  Well, it went something like me thinking one morning, God, what should I talk to these people about?  I am feeling clueless and have no specific direction other than thinking it's December, so it should be Christmasy or Adventy or something.  Then later as I was praying (I journal my prayers, by the way, because, well, focus, you know), I called God the Prince of Peace, and it was like a light bulb went on.  I felt 100% positive that was the trail I was supposed to follow for the folks at St. Andrews.  Fancy, right?  Ask God for direction and He gives it.  And yet, I am still always amazed He does.  Grace upon grace!

Christmas is a time when we think a lot about peace.  We long for "peace on earth" and receive Christmas cards with the phrase, and probably an image like the one above, maybe with an outline of the world, as well.  I have a Peace decoration I put above my kitchen sink this time of year, in fact.  But what the heck is peace?  I mean, what are we talking about, and do we all think of the same thing?

The dictionary defines peace as:
That sounds good, right?  A life free of disturbance and a world free from war.  Sign me up!  I really, really hate conflict.

But the Bible calls Jesus the Prince of Peace, which makes me think that maybe peace is something more that mere tranquility and the absence of war.  Maybe peace is not about my personal comfort, my plans coming to fruition without difficulty, or all nations and peoples getting along, but rather about something deeper - soul deep - a reconciliation and a comfort that we all long for, but can't create for ourselves.

Speaking of, the peace that we try to create always has an end, doesn't it?  There's often that uncomfortable feeling when things are going well that perhaps something terrible is lurking just beyond the next sunrise.  The peace we long for cannot be offered to us by the world in which we live, the governments ruling over us, or the protections and plans we put in place.

For to us a child is born,
to us a son is given;
and the government shall be upon his shoulder,
and his name shall be called
Wonderful Counselor, Mighty God,
Everlasting Father, Prince of Peace.
Of the increase of his government and of peace
there will be no end,
on the throne of David and over his kingdom,
to establish it and to uphold it
with justice and with righteousness
from this time forth and forevermore.
The zeal of the Lord of hosts will do this.

In Hebrew, peace is the word shalom, which means completeness, soundness, or well-being.  The angels announced peace to the shepherds.  Jesus spoke of His peace, a peace different than the world gives,  to His disciples as he was nearing His crucifixion and ascension.  Paul taught that when we have been justified by faith in Christ we have peace with God.  I don't know about you, but I want to experience that kind of peace!

But since this post as gotten long enough, I'll save the details of how to experience the peace offered to us by the Prince of Peace in a subsequent post.  Advent is all about waiting, right?

Email ThisBlogThis!Share to TwitterShare to FacebookShare to Pinterest
Labels: Because of Who God Is, In Prayer, In the Word, In the World