Wiped out Sins? Times of Refreshing? How Can I Sign Up?!

Repent, then, and turn to God, so that your sins may be wiped out, that times of refreshing may come from the Lord, and that he may send the Christ, who has been appointed for you—even Jesus.
Acts 3:19-20

I came across this verse in my reading this morning.  After reading to the end of the chapter, I went back to it, wrote it out in my journal, thought about it a minute.  At first reading I thought, yes, please, I want refreshing from the Lord.  That was the part that first caught my eye.  Then I had to go backwards to find out how it is that we experience that.

Repentance.  Turning to God.  Turning away from sin, letting it be enveloped in the forgiveness of the Father.

Yesterday I had gotten upset about something and really couldn't wouldn't let it go.  At least not completely. I needed to hold on to my arrogance, just a little bit, caressing it with judgmental thoughts.  After all, my expectations had not been met and something I was excited about was not to be.

Not completely letting go, however, was going to keep me from full joy.  I needed this word on repentance.

Repent, then, and turn to God.

So there on the front porch in the the "quiet" of the morning - birds chirping, traffic humming - I did.  Friends, the Bible says, (in more than one place!), that when we do that our sins ARE wiped out.  And let me tell you, refreshing DOES come from the Lord, the One who forgives, over and over and over again.  There's such rest in repentance. 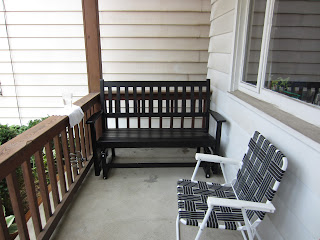 The above is in the middle of a short address Peter gives to a group of Jews who have just watched him heal a lame man in the name of Jesus.  At one point he says this, You killed the author of life, but God raised him from the dead.  Then he goes on a couple of sentences later, Now, brothers, I know that you acted in ignorance, as did your leaders. But this is how God fulfilled what he had foretold through all the prophets, saying that his Christ would suffer. Repent, then, and turn to God, so that your sins may be wiped out, that times of refreshing may come from the Lord, and that he may send the Christ, who has been appointed for you—even Jesus.

Peter, addressing those whose voices had cried out, "Crucify him!", gave a call to repentance.  The very God they crucified was inviting them to know Him, to know forgiveness, to know His refreshing.  What?!  There are no words.  Will He not, then, do the same for us, as He has promised in His word?  Day after day, refreshing us with His forgiveness and presence, as we repent and believe?

Repent and believe the good news!

PS  Sorry I have not gotten to Part II of the Life-Giving summer.  There's sick child in our home and I've not had the time to sit and think-type it all out.  It'll come, I promise!
Posted by Heather at 3:22 PM