I originally shared this post in early December 2011,
and repost today for your edification as Advent 2018 begins. 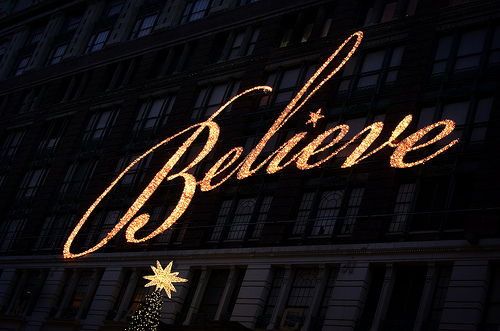 'Tis the season!  Stockings are hung, halls are decked, carols are playing (everywhere you go!)  It is a season of wonder, of joy, of hope, of delight.  And according to Macy's we should Believe.

Yes, surely it has something to do with the fun of Santa Claus making his yearly appearance (without being seen!) in the homes of those with little ones.  But for Christians, people often referred to as "believers," that word and this season offer so much more.

These weeks leading up to Christmas are a time of wonder, joy, hope, and delight because we believe not in one we outgrow, but rather in One who is eternal, all-knowing, ever-present, and Almighty.  The One who came on that first lonely Christmas night so many years ago.

Emmanuel.  God with us.

Christmas is no blip on the screens of our lives, to be momentarily enjoyed and immediately forgotten.  Christmas is, rather, a major "we interrupt this program" service announcement than changed the course of human history.  God, set in motion events that would bring real justice and real peace between man and Himself.  Christmas looks toward Easter and points to eternity.

For God so loved the world that he gave His one and only Son, that whoever believes in Him should not perish but have eternal life.  John 3:16


Our culture invites us to believe in something during this magical season, but offers no real consensus on what.  And it leaves most of us disappointed on Dec. 26 when the fun ends, the decorations are down, the gifts are opened, and the parties are over.

But God invites us to  believe in Him, the only wise God who offers a living hope, a new life, the true light that is the light of men and does not fade when the bright decorations come down.


Christmas is an invitation to believe.
Thanks for the reminder, Macy's!


St. John does not include the Christmas story in his gospel account; he zooms out to the bigger picture, looking from eternity past into eternity future:

There came a man who was sent from God; his name was John.  He came as a witness to testify concerning that light, so that through him all men might believe.  He himself was not the light; he came only as a witness to the light.  The true light that gives light to every man was coming into the world.

He was in the world, and though the world was made through him, the world did not recognize him.  He came to that which was his own, but his own did not receive him.  Yet to all who received him, to those who believed in his name, he gave the right to become children of God—children born not of natural descent, nor of human decision or a husband’s will, but born of God.

The Word became flesh and made his dwelling among us. We have seen his glory, the glory of the One and Only, who came from the Father, full of grace and truth.

John testifies concerning him. He cries out, saying, “This was he of whom I said, ‘He who comes after me has surpassed me because he was before me.’”  From the fullness of his grace we have all received one blessing after another.  For the law was given through Moses; grace and truth came through Jesus Christ.  No one has ever seen God, but God the One and Only, who is at the Father’s side, has made him known.


God has made Himself known in Jesus. (Whoa!)

All the longings of creation are met in Him.

The waiting is over;
the kingdom is near;
repent and believe the good news!